NHL piles on the outdoor fun 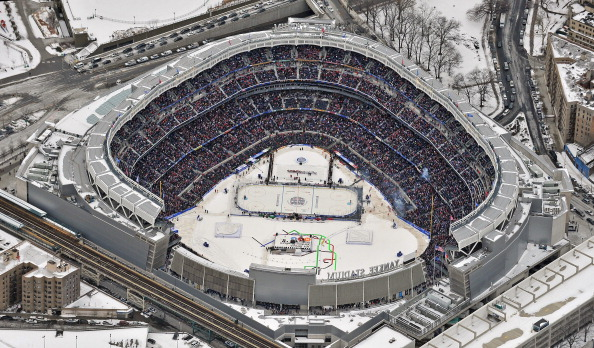 The NHL’s long been a second fiddle to the NFL this time of year. But its annual outdoor hockey game on New Year’s Day, the Winter Classic, always managed to pack in the fans and steer a national audience its way. Fans who make it from the stadium parking lots into the venue won’t be reprieved from the winter elements, but that hasn’t been a deterrent. Because of the attention the Winter Classic’s pulled in the last few years, the NHL decided to blow out the outdoor game concept by adding four of them, calling it the NHL Stadium Series.

The first half went down last weekend as a booming success. Act III takes place tonight with the Rangers showing for an encore performance against the Islanders after blowing out the Devils Saturday. Yankee Stadium parking is available for the event that continues to gain momentum all the way up until face-off tonight at 7:30.

Once the pack of three games in five days concludes tonight, the Stadium Series takes a breather before it wraps up in Chicago March 1. Blackhawks fans were treated to an outdoor affair just five years ago in the second of the six Winter Classic games to date. This time, however, fans will head south for Soldier Field parking instead of north for Wrigley Field, where the 2009 game was played.

Once fans look past the novelty of an outdoor hockey game, they’ll realize a juicy match-up awaits with Pittsburgh. Both teams were 1-seeds in last year’s playoffs and both sit atop their respective divisions with the most points at the moment. And, of course, the Blackhawks are playing out this season as the defending Stanley Cup champions.

Throwing in Canada’s Heritage Classic, another outdoor game on March 2 between Vancouver and Ottawa, makes six outside games in 2014. Early reports indicate the league will cut down on the number of games next season. But deemed a widespread success from their inception, no one expects these outdoor NHL hockey games to go away. Washington, D.C. has already been named the host of 2015’s Winter Classic with the venue to be announced, and Minneapolis, Denver and San Jose were specifically named as potential markets for future games.

Barbarians at the Gate: How the $100 Billion Parking Industry will be Disrupted