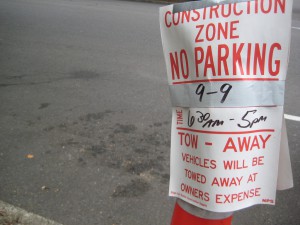 Here at ParkWhiz, we’re always tracking what’s happening in the parking market, and earlier this week Jesse Lawrence of TiqIQ wrote a piece for Forbes about the impact of construction on parking prices. He chose for the New Atlanta Stadium for the subject of his piece.  Not surprisingly, prices have gone up with the decreased number of spots available.

Last Sunday, the Atlanta Falcons played their first game at the Georgia Dome with ground broken on their as-of-yet-named new Atlanta Stadium. While the stadium won’t be ready until 2017, it’s already having an impact on what fans are paying to see one of the two preseason games on the Falcons schedule.  As a result of the new constructions, over 1,300 parking spots have been eliminated to make way for the new stadium.  That’s a 30% decrease in available parking, and like the ticket market, with less supply comes higher prices.

According to Parkwhiz, the price for Georgia Dome parking is up 36% compared to this time last year, which suggests that the parking market is pretty efficient.  That price increase also suggests that fans are not taking the Georgia Dome’s recommendation to take public transportation. With a less than sell-out crowd for last Friday’s preseason opener against the Dolphins, logistics were not overly complicated, despite a Braves game taking place across the street at Turner Field. However, that is likely to change when the full 80,000 fans pack in on September 7th to see Matt Ryan and the Falcons open their season against the Saints.

This Weekend in Chicago, New York City, and San Francsico