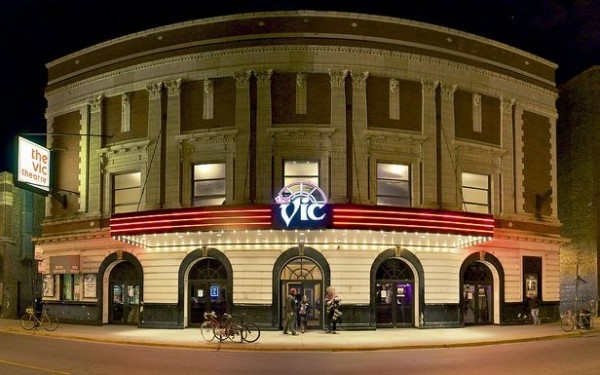 The Vic Theatre is one the best places to see live music in Chicago. Unfortunately, it’s in one of the hardest places to park as well.

The Vic Theatre is in the heart of the Lakeview neighborhood of Chicago, which is quite a busy place. South of Wrigley Field and west of Lake Michigan, the area has near-constant traffic. The Vic Theatre parking can be hard to find due to the Vic Theatres seating space for about 1,000 people, and the ability to hold 1,400 when standing room only is taken into account. The large amount of people in such a small space makes it hard to find parking in the heart of Lakeview.  Known for its stunning acoustics, marble floors and staircases, the Vic is a theatre that is still kicking around after a century, in this case often hosting rock concerts, comedians and even movies.

Speaking of movies, later at night the theater takes on its alter-ego of “the Brew & View” which features second- and-third run films with a copious selection of alcoholic beverages. Past guests include comedians Nick Swardson, Jerry Seinfeld, Bill Murray, bands such as Bob Dylan, Tom Petty, Trampled by Turtles and the Punch Brothers. If you plan ahead, you can make use of ParkWhiz and book your Vic Theatre parking spot in advance, so your day won’t be trampled by traffic.

The Vic Theatre was constructed in 1912 with the name of “the Victoria Theatre,” the structure designed by an architect named John E.O. Pridmore. The stage has been used for more than music and performances, such as in the 1960s when the stage was used as a place to repair cars, before becoming a movie theater in the 1970s. Walter Klein, Jr. bought the building in 1983 and reopened it the next year after a stint playing Indian cinema.  Bill Murray taped the 25th anniversary of the world-famous Second City comedy company. Parts of the Vic are from older, now-demolished Chicago venues. The top south opera box makes use of walnut railings from the Granada Theater, while the opera boxes’ plush wingback chairs originated from the Pump Room. The history of the building becomes even more curious when secret access to hidden rooms functioned like part of a speakeasy, with hidden tunnels used by mobsters during the Prohibition era. Unlike the mobsters of Chicago’s past, the average theater-goer has to make due with his car from get to place to place. In a crowded area like Lakeview, Vic Theatre parking spots are hard to come by, but luckily with ParkWhiz, you can book a parking spot in advance.

When you use ParkWhiz, you can say goodbye to having to circle around and around to find a parking spot at the Vic. All you need to do is find the event that you want to see on the ParkWhiz website, book your Vic Theatre parking spot and print out your parking pass. When you bring your ParkWhiz parking pass with you, all you need to worry about is enjoying the show, rather than looking for a place to park.